Logistic regression is the next step from linear regression. The most real-life data have a non-linear relationship, thus applying linear models might be ineffective. Logistic regression is capable of handling non-linear effects in prediction tasks. You can think of lots of different scenarios where logistic regression could be applied. There can be financial, demographic, health, weather and other data where the model could be implemented and used to predict next events on future data. For instance, you can classify emails into spam and non-spam, transactions being fraud or not, tumors being malignant or benign.

In order to understand logistic regression, let’s cover some basics, do a simple classification on data set with two features and then test it on real-life data with multiple features.

Since logistic regression based classifier is non-linear, we need a non-linear kernel function. Logistic regression uses a sigmoid function which is “S” shaped curve. It can have values from 0 to 1 which is convenient when deciding to which class assigns the output value.

Using python, we can draw a sigmoid graph: 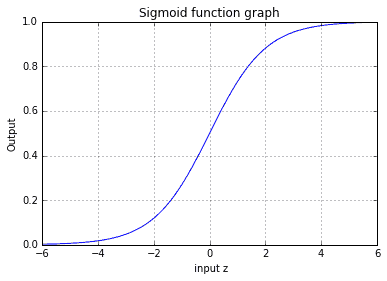 To make a hypothesis out of sigmoid, we need to substitute the z parameter with a vectorized form of ΘTx which represents input features and parameters (weights). Where,

So we can write a hypothesis in compact form:

To minimize cost function we need to use gradient function:

We need to minimize J(Θ) we run a gradient descent algorithm where each Θ is adjusted during several iterations until converge.

We can write a cost and gradient functions python code:

To minimize cost function we have two ways – write our loop where we step by step update theta parameters until getting to the converging point or use built-in optimization routine which takes care of the task. Since we have done manual optimization in linear regression, let’s move on and use tools that make life easier. For optimization, we are going to use a function called fmin_bfgs which takes cost function, initial thetas and produce thetas of minimized function. Good news is that we even don’t need to prepare the gradient function.

After running minimization we get theta parameters that can be used in classification mode. Visually we can draw a decision boundary on our training data to see where data is separated into classes. 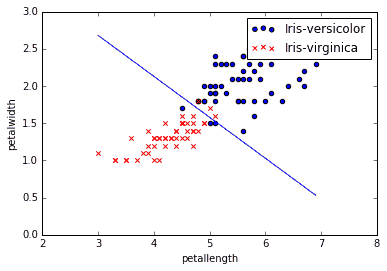 We should not take results as granted. We need to test if the model is valid and can be used for classification. We need to set up a test set with known labels. First of all, we can write a predictor function which would produce class 0 if the probability of hypothesis output is h<0.5 and class 1 if the output is h>=0.5.

Then we can prepare some test data to make sure if classifier works OK.

And finally, we can run our code on training data or separate validation set to see classification accuracy.

We can double check the model on data by using WEKA software by selecting the same data and Logistic classifier:

we can see that using the same model in WEKA we get also 94% accuracy.

Next time we will touch the more complicated case of Logistic regression which includes regularization, multidimensional sets. As you start digging deeper, you will find that logistic regression is only one of many available classification tools.

If you would like to test the algorithm by yourself, here is logistic_regression.zip of python code and dataset or use python assignment help.