Setting WiFi on Raspberry Pi is easier then described earlier. The raspberry Pi has went through upgrades and generations, so most of the settings has been simplified. If you set up WiFi using GUI, then it same as on any windows – you select SSID and enter a password.

I feel that Raspberry pi should be mostly accessed through console, since it is designed to be an embedded computer. This is why it is important to have ability to do all things in command line.

No matter which raspberry pi you have, you can set wireless network the same way. Firs of all, if you use Raspberry Pi 1 or 2 you will need a USB wireless adapter. The later boards already come with build in WiFi and Bluetooth connectivity.

To set up WiFi, you need to edit wpa-supplicant configuration file, which can be accessed by entering:

To the bottom of file add your network settings as follows:

Save settings by pressing CTRL+X and Y to confirm. You may need to reboot your board for network to connect.

Raspberry Pi Model B comes with Ethernet interface built in where you can plug cable and have internet access. In many cases this is enough, but what if you want it to be more portable and still be able to connect to it? One solution would be using Wi-Fi adapter. Since there are a couple of USB connectors, probably the best choice would be using USB based Wi-Fi modules. You can get them in a very compact size that isn’t that good at sensitivity and range or choose bigger ones with an antenna. No matter what type you select – all of them works the pretty same way. 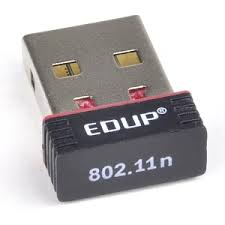 For my experiment, I am going to use a cheap Wireless adapter EDUP model EP-N8508. It supports all the necessary features and standards that are needed to have WiFi. The small form factor makes it attractive to use on many devices like Laptop and so on Raspberry Pi. You may need to use a powered USB hub to get reliable performance. For now, I am using it attached to one of the USB ports directly.

As always in order to learn and understand we are going to set up Wi-Fi from the command line using PuTTY. So for this, we will need an Ethernet connection.

First of all, log in to Raspberry Pi and run the command:

Here you should see

With the latest Raspbian, all: loopback, Ethernet and WLAN interfaces should be present. If not then add missing parts. Be sure that wlan0 is using DHCP (not manual) IP configuration.

To configure the Wi-Fi connection to a secured network open configuration file by running the command:

and edit it to connect to a WPA secured network:

Until Wi-Fi adapter isn’t plugged in you can run the command:

to see that there are two interfaces active – loopback and eth0:

No Ethernet yet. Now plug in the adapter and reboot Raspberry Pi either completely with

Also, you can disconnect and reconnect wlan0 adapter only so you don’t: have to reboot. For this first run:

then you will see the message:

which can be ignored.

After wlan0 is connected you can run the ifconfig command again to check if wlan0 has its IP address assigned. Also, you can scan access points with the command;

Now when you see you Wi-Fi is working, you can remove ethernet cable and reboot. This will make wifi become the default network interface.

I am sure you will run into several problems like mistyping things, setting something wrong. Actually, it took a couple of hours to get this working. With Linux you should get used to this – in the command line, you can’t miss anything as there is no GUI that does this for you. If you have a different adapter, you may need to check this list to find out common problems with it.