Previously we have tried logistic regression without regularization and with simple training data set. Bu as we all know, things in real life aren’t as simple as we would want to. There are many types of data available the need to be classified. Number of features can grow up hundreds and thousands while number of instances may be limited. Also in many times we might need to classify in more than two classes.

The first problem that might rise due to large number of features is over-fitting. This is when learned hypothesis hΘ (x) fit training data too well (cost J(Θ) ≈ 0), but it fails when classifying new data samples. In other words, model tries to distinct each training example correctly by drawing very complicated decision boundary between training data points. 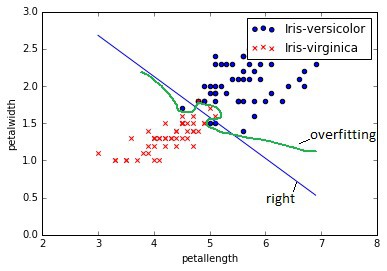 As you can see in image above, over-fitting would be green decision boundary. So how to deal with over-fitting problem? There might be several approaches:

We leave first two out of question, because selecting optimal number of features is a different topic of optimization. Also we are sticking with logistic regression model for now, so changing classifier is also out of question. We choose third option which is more general and proper way of addressing problem.

This is cost function with regularization:

We can see that parameter Θ0 should now be regularized.

The other procedure remains same – we need to minimize J(Θ) until converge.

A good practice is to normalize training data in order to bring scales to similar level. This makes optimization task more easier and less intense. For manual operations you could use mean normalization (sometimes called Z score):

If you don’t want to waste time coding, then use scale function from scikit-learn library. As you progress further, you will find that all tools and functions required for most of machine learning tasks can be find in this library.

For optimization of Θ we are going to use function called fmin_bfgs which takes cost function, initial thetas and produce thetas of minimized function. This is same as previously, the only new thing is lambda parameter which should be included in to parameter list.

It is hard to plot data set in one plot, this might be done by plotting plot matrix where each pair of features might be represented. Also this could be done with 3D graphs. This is a fragment of plot matrix:

Each patient has marker either it is malignant or benign. In order to teach classifier and test it, we split database in to two sets – training set and test set. By applying test set to built model we can validate if model is good.

Running model with test set we get Accuracy: 98.1%.

Algorithm and data sets for your own try is here: logistic_regression_reg