There is a Raspberry Pi 3 out there which is much faster than version 1 and 2. While latest two are faster than first model, I thought it would be great to give some purpose to first Raspberry Pi model B. We share several computers around the house and sometimes need simple file storage solution to make backups, share and store. Rasperry Pi model B is sufficient for simple Network Attached Storage (NAS) solution. Such network automation setup doesn’t need much processing power to manage drive. And there is also an option to have torrent client running 24/7. Other benefits of using Raspberry Pi is low power. 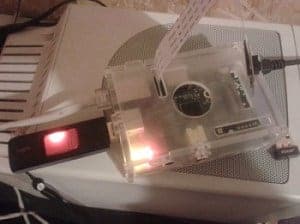 Lets go through all steps on how to set up Network Attached Storage on this Raspberry Pi. You can go with several different solutions on setting up NAS. You could go with cloud solution like Owncloud which is similar to Dropbox. This might be convenient in many ways, but I would like to have ability to use drive as portable media when needed. In that case I am going to stick with SAMBA server.

As usually we are going to set up things via SSH in command line. And the first thing you should do is to update Raspbian with following commands:

The drive I am using is formatted as NTFS, so we need to install support of this file system:

After command is successfully finished, attach drive to Raspberry Pi USB port. For now I am using 16GB flash drive. Wait until drive LED blinks when recognized and enter following command to see if drive is identified:

We can see that out drive was successfully recognized as /dev/sda1 device as FAT32.

Now we need to create a directory in Raspberry Pi where the drive could be mounted. You can create mount directory anywhere you want, but it is recommended to do it in /mnt directory. So we enter command:

We can mount the drive with the command:

then test its contents

This manual mounting operation stays active until next reboot. If you don’t want to mount drive every time after power on automatically when Raspberry Pi boots up. For this we need to edit fstab file:

to to the bottom of file as follows:

Save file and reboot Raspberry Pi to see if settings are working. After it boots up, you should access drive contents without any additional action. For instance you can try creating new directory:

Set up Samba on Raspberry Pi

We have set up drive and we can proceed to Samba installation. First of all lets install Samba package with following command:

Afrer it installs, next step is to edit configuration file smb.conf. It is a good practice to make backups of important files before messing around. We can easily do this with cp command as follows:

Now we can start editing configuration file by opening it with nano editor:

In configuration file we need to add following to the end

save configuration file and restart samba server with command:

of course, you can create your own user for this.

Accessing NAS server from windows is easy. All you need is to:

This is it, you can create, download, upload and delete files on Raspberry Pi Network attached storage.

Lets do some initial transfer speed tests. Raspberry Pi is connected via WiFi to network: 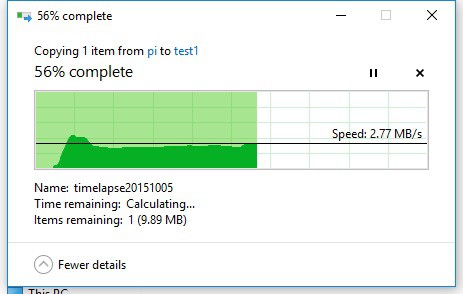 As you can see download and upload speeds are about 2.7MB/s. 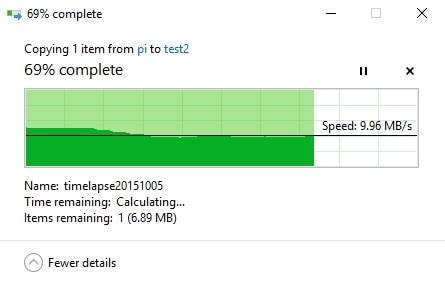 As you can see with LAN connection, file upload and download speed is up to 10MB/s. I think this is not too bad for basic usage.

Final advice. If you do not own spare Raspberry Pi, don’t waste money on building NAS – better get specialized hardware which is cheaper and is faster option. In other hand if you are looking for flexibility and low power option, Raspberry Pi based NAS could be great option especially if you have spare board laying around. If you need more storage than USB stick, get portable HDD. Just be sure to match power supply, as USB port can be too weak to supply enough current.