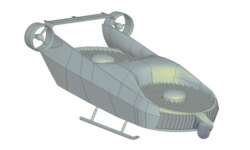 The autonomous flying ambulance, nicknamed the Mule, created Rafi Yoeli, who used to work for Boeing and Israeli Aerospace Industries. He later founded his own company, Urban Aeronautics, in Yavne, Israel. The Mule is the smaller version of another Urban Aeronautics product, the X-Hawk. The former vehicle has been designed to carry injured military personnel (hence the name “flying ambulance”) out of combat areas. At the same time, the latter is aimed at urban and personal use. Several of Yoeli’s patented inventions are integrated into the Mule, including his VTOL (vertical take-off and landing) vehicle technology and the hybrid drive-powered lift platform. Both the Mule and the X-Hawk, for instance, are classified as VTOL vehicles.