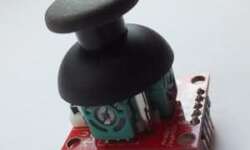 In many cases, the joystick manipulator is the best choice for user input. Whether it is a game, robot, or flying machine – a joystick is the most intuitive way of controlling them. You can actually find them in gaming controllers like PlayStation or XBOX. The one we are going to the interface is Thumb Joystick I purchased some time ago from SparkFun. They are really cheap, and as users report, it is practically the same as in XBOX 360, which can be replaced if one is broken. I didn’t bother making a PCB for it – I just used a breakout board for it, which also can be found on SparkFun. Simply speaking, this joystick is nothing more than two potentiometers and one pushbutton. It is designed so that potentiometers are oriented perpendicular and thus moving stick; you can have X and Y-axis control. The push-button is simply an action button that can be activated by pressing the joystick down. So controlling joystick is a matter of analog read of both potentiometers with microcontroller ADC inputs.