I have got two atmegas from my friend. He stated that they are burned and can be thrown to garbage. He also mentioned that they stopped responding after they were programmed. So I asked him to give those to me to try them. I had in my mind, that this is a result of bad usage of security bits. There is always confusion in these bits, because security bits are programmed by writing ‘0’ values and unprogramed with ‘1’. I didn’t really expected to make them working again as my friend did quite rude experiments with them. 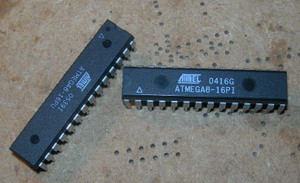 What can I say – he was right by saying they are burned. Bu I guess some of you will like to see what I was doing in order to recover them. I decided that he unprogrammed all four security bits ( CKSEL0, CKSEL1, CKSEL2, CKSEL3 )by writing ‘1’ to them. This situation means that Atmega8 has to be clocked from external clock signal. I supposed to program those bits to work atmega normally with quartz resonator. 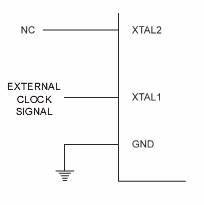 I needed a clock signal. I decided to take it from another Atmega development board from XTAL1 point.

I connected clock signal directly from quartz. But in some cases you might find info that it is better to connect through a buffer. Bu this trick is working in both ways. In real applications it is much safer to use buffered clock transfer.

I tested clock signals with oscillator, they were OK, connected programmer and started PonyProg and there were not response. Connected another atmega – it was dead – supply circuit was short. So I crossed them with red marker – experiment over … but it was a fun playing arround. 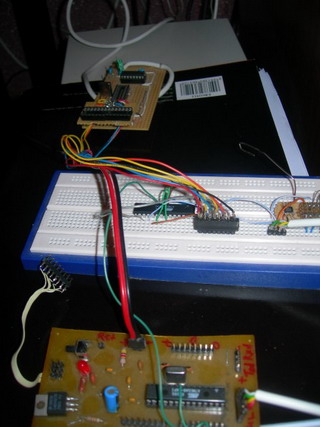