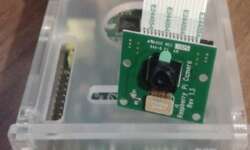 Recently I’ve received a Raspberry pi camera board. So decided to make a post about it. Raspberry PI comes with two interesting connectors onboard. One is between Ethernet and HDMI, and another is near GPIO. The one closer to the Ethernet connector is CSI (Camera Serial Interface) bus interface. This interface is common in mobile phones with cameras. This interface is specially designed for high data rates that are necessary for transferring pixel data. The camera board is a small (25mm x 20mm x 9mm) board where a fixed-focus 5MP camera module (OV5647) is assembled. The camera connects to Raspberry Pi via a 15cm ribbon cable. Camera module is capable of producing 1080p images at 30fps or 720p at 60 fps and 640x480p at 60/90 fps. Obviously, such images and fps require a high-speed interface and processing. So CSI is connected directly to Raspberry Pi GPU, which can process images without ARM intervention. This is why the camera module is a much better choice than the USB camera, which occupies the main processor and slows down the whole system. GPU processing also benefits with fast H264 video encoding and JPEG compression capabilities.