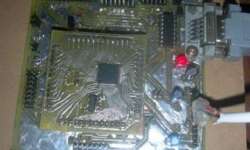 WinARM is a collection of GNU tools for the ARM MCU family packed by Martin Thomas that works on MS Windows. WinARM is developed by inspiration on the WinAVR project, and it is effortless to start working with it if you had a chance to try WinAVR. WinARM doesn’t depend on Cygwin, or MinGW-environment like GNUARM tools do. WinARM toolset is compiled to work with most ARM microcontrollers, including the LPC2000 series, Atmel’s ARM microcontrollers, and Analog devices ARM microcontrollers. Basically, tools should work with any microcontroller with ARM architecture.